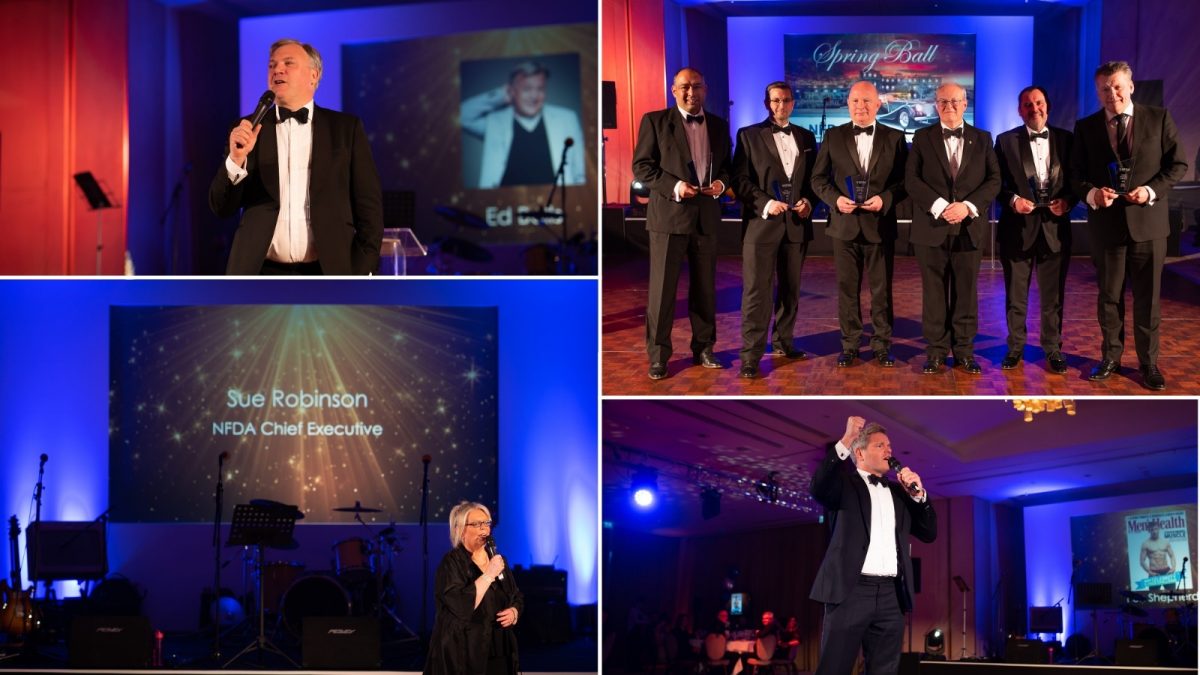 Following two years of forced pause, the NFDA Spring Ball was back on Saturday 2 April 2022 at The Grove in Hertfordshire. The Ball brought together franchised dealers, manufacturers and senior automotive stakeholders who enjoyed an evening of fine dining, entertainment, and networking opportunities.

TV presenter Mark Durden-Smith returned to The Grove to host the event with his uniquely engaging style. Former Cabinet Minister Ed Balls was this year’s guest speaker. Ed shared with the audience insights into his political career as well as anecdotes from his show business experiences.

After a champagne reception and a three-course meal, Mark Durden-Smith and NFDA Chair David Newman hosted the Awards ceremony.

Manufacturer Partner of the Year
Winner: Toyota / Lexus
Toyota / Lexus won thanks to the ongoing strong relationship with their dealer network and their consistently outstanding performance in the NFDA Dealer Attitude Survey. Darren Morris, Chief Financial Officer at Toyota collected the Award.

Industry Personality of the Year Award
Winner: Mark Lavery, Cambria Automobiles CEO
Mark Lavery scooped the prestigious accolade thanks to his tireless work to drive innovation within the industry and also to promote the NFDA to dealers

In 2022, for the first time, NFDA presented two new awards.

This new award, collected by Richard Spencer, Group Aftersales Director of Waylands, was introduced to recognise the efforts and investment made by dealer group to embrace and drive forward the transition to zero emissions.

The Green Manufacturer of the Year Award

This new award recognised the important steps taken by a car manufacturer to work closely with its dealer network and assist retailers in meeting the demand for alternative fuel vehicles. Kia received the highest average score when dealers were asked “how satisfied they were with their alternative fuel vehicle offering” in the latest Dealer Attitude Survey. Steve Hicks, Kia's Sales Director, collected the Award.

At the Ball, a total of £4,380 was raised for the British Red Cross Ukraine appeal. Additionally, NFDA will make a donation to the automotive industry charity BEN.

Sue Robinson, NFDA Chief Executive, said: “It was exciting to be back hosting our annual NFDA Spring Ball and celebrate automotive excellence. A huge thank you to our sponsors and all those who attended and donated generously to the British Red Cross. Finally, congratulations to all the award winners on their achievements, your support to our industry and the NFDA is truly remarkable”.

For more information about the NFDA Spring Ball or to request any image from the night, please email lena.patel@rmif.co.uk.